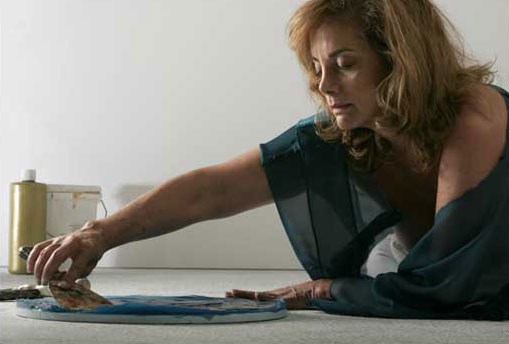 Ines Ebrenz was born in Rio de Janeiro, Brazil. Being always interested, since an early stage, for the relationship between Art, its expression, and nature she studied Fine Arts at The Instituto de Belas Artes in her native city, focusing in painting and drawing. Later on she went into other disciplines the likes of Sculpture —undertaking individualized studies at Selma Abdon Calheiras’ Studio and also with Marcio Mattar— and Graphic Design, among others.

Ines Ebrenz lived in Cologne, Germany, for ten years before moving to Connecticut in 1996 and then to New York in 1998. During these years she privately researched into the abstract field experiencing with different tools, materials and medias.

As a result of her large investigation she is currently producing series of paintings where color, material and self-exploration play an important role. From ancient Greek literature to modern oriental philosophy her metaphysical outcome has developed an own informalisme approach.

Her work is included in many private collections throughout Brazil, Australia, Germany, Spain, Italy and the United States. It has been shown in exhibitions in Germany, Brazil and the United States. Her abstract mixed media paintings on paper were included in the Salon 2000 exhibition at Broadway Mall Gallery, with the West side Arts Coalition, in October 1999. She also was recently included in Abstract 2000 at the same venue.

Ines Ebrenz is the recipient of an award of merit in Manhattan Arts International magazine’s 8th annual 1999 competition. One of her paintings were selected to be featured in the November-December 1999 issue of the magazine which focused on the healing power of art. Also in May-June issue her profile and a painting were enclosed.

2002 “The world unites in peace, through art” at Art for Healing Gallery. New York, NY.

2001 “The Buckhead Art Connection” at House of Colors. Atlanta, GA.